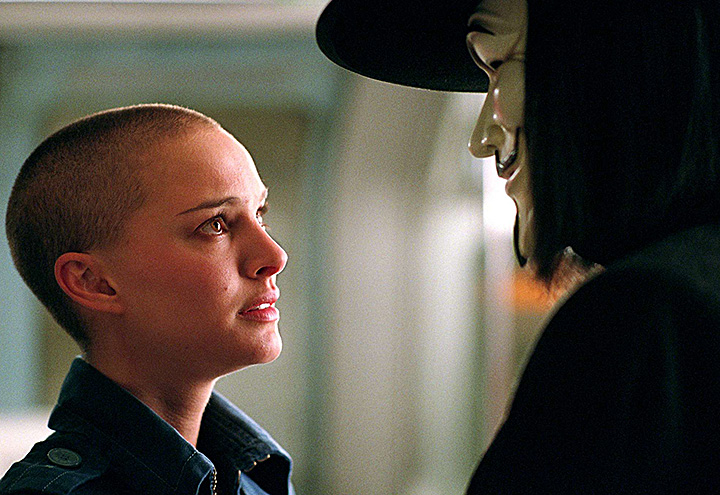 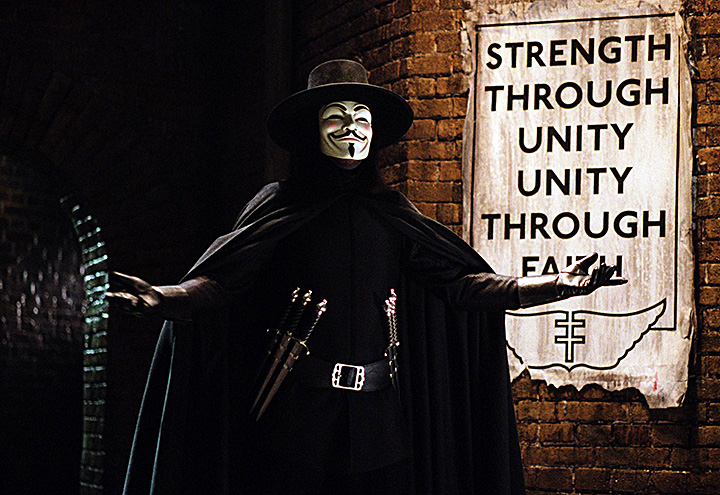 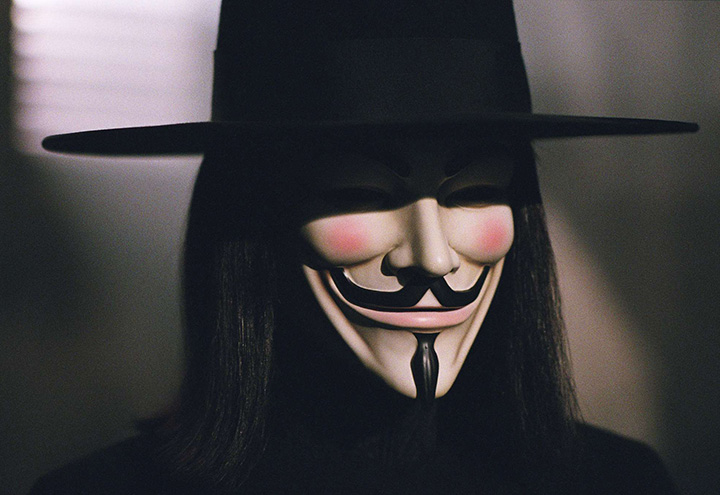 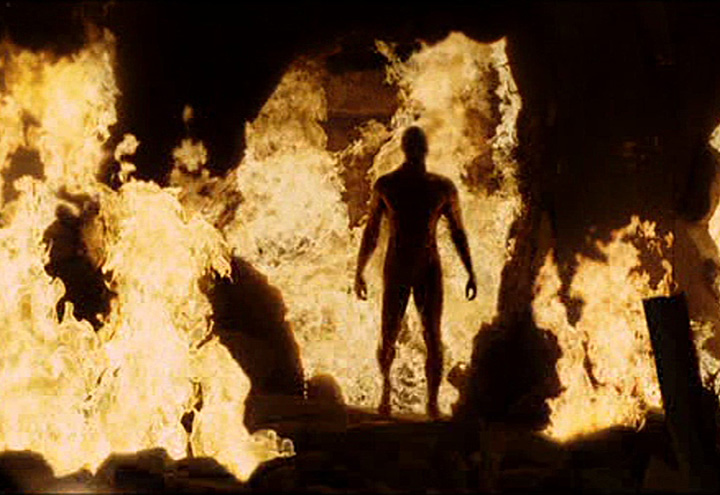 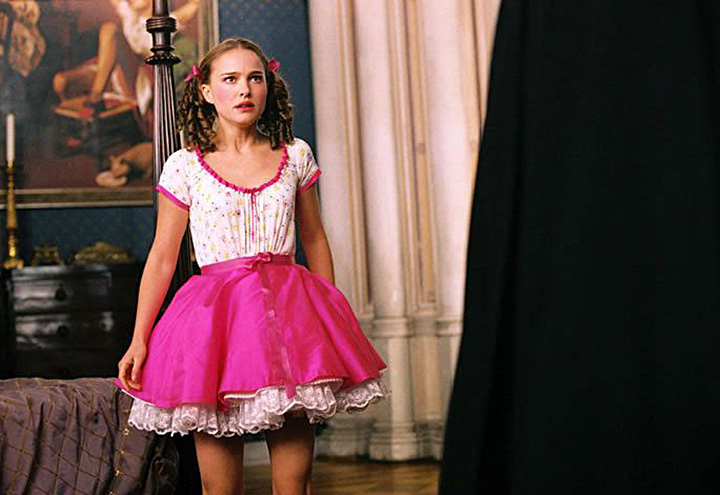 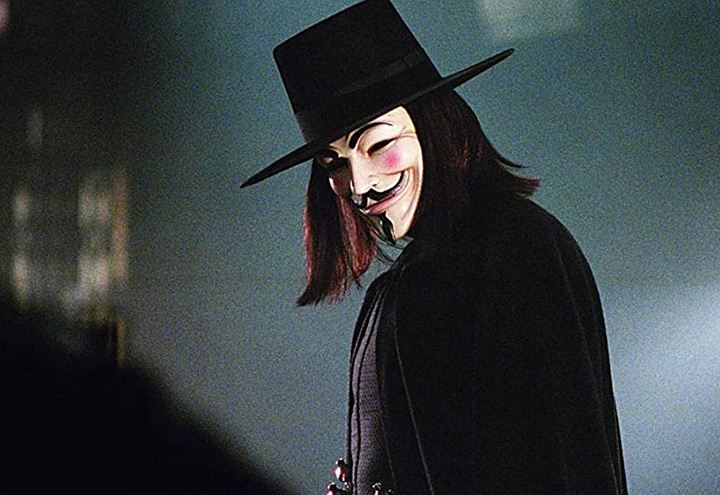 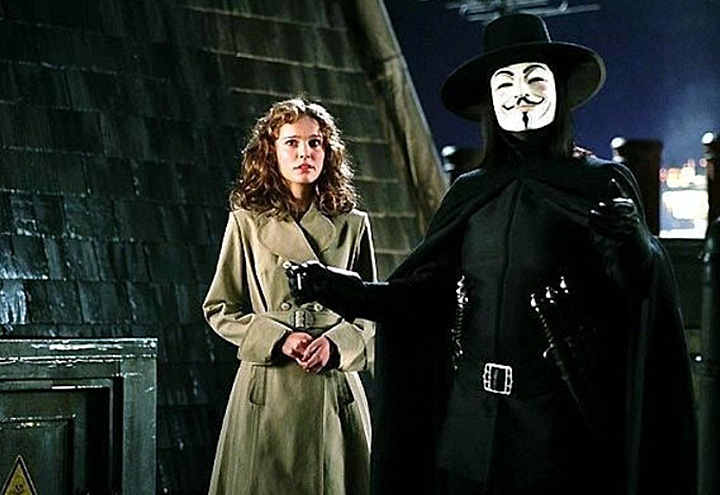 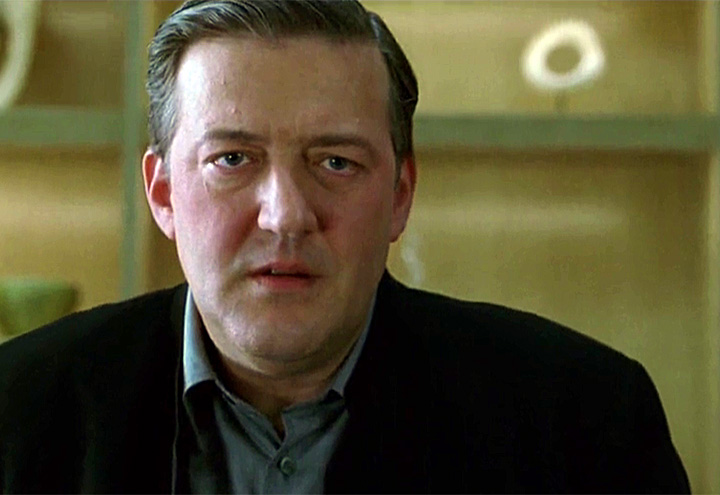 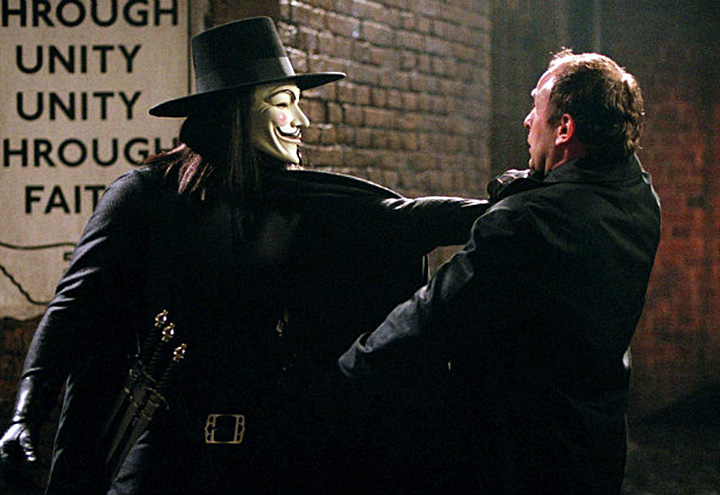 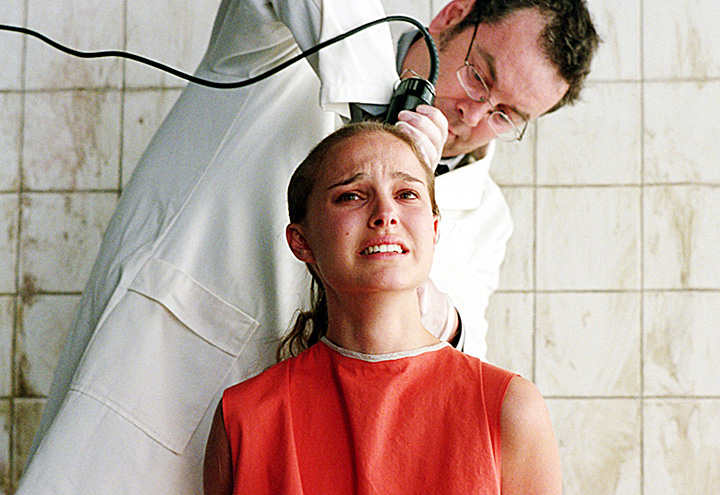 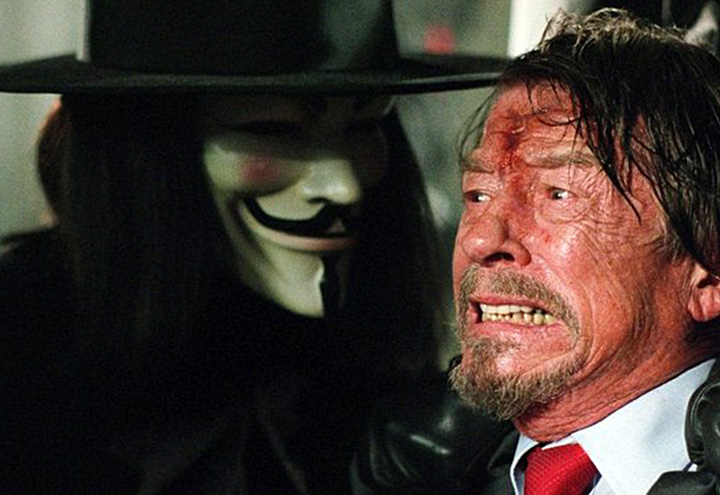 slideshow
Cast:
Synopsis:
London in the near future. Britain is under the fascistic rule of dictator High Chancellor Adam Sutler, whose proclamations come from large television screens and are pumped into every home. The city is under a strict curfew, but Evey Hammond, a young woman who works for the state TV station, has a date with TV presenter Gordon Deitrich and dares to break it. She is seized by the brutal secret police known as The Fingermen, who are about to assault her when they are attacked and slain by a man wearing a cloak, a large hat and a Guy Fawkes mask, calling himself V. He leaves Evey to get home, then continues with his mission, to blow up the Old Bailey, which is now just used for show trials, at midnight. His plan works and V announces that in one years time, he will blow up the Houses Of Parliment as a blow against Sutler’s dictatorial rule. An order is put out that V must be captured, with Fingerman head Creedy and top policeman Inspector Finch leading the hunt. V enters the TV centre where Lewis Prothero, a propaganda broadcaster who was once head of the sinister Larkhill Resettlement Camp works, and kills him, just as Finch arrives to interview Evey. V takes Evey with him to his base, an underground labyrinth of tunnels and persuades her to help him in striking at his targets. First is Bishop Lilliman, a paedophile who also worked at the camp, who becomes another of V’s victims. Scared of being with the murderous masked man, Evey escapes and goes to see Dietrich, who is in fact secretly gay, homosexuality being punishable under Sutler’s rule, and persuades him to make a humourous anti-government broadcast. V’s next victims is Dr. Delia Surridge, who performed experiments on inmates at the camp, but leaves her diary by her body in order that Finch may find it. Finch finds it and discovers the identity of V, an inmate known as ‘the man in room V’ in the camp, given amazing strength by experiments performed on him and severely burned in the blaze he set which allowed him to escape. Dietrich is traced and killed by the Fingermen, and Evey is arrested for his murder. She is imprisoned and tortured in order to reveal what she knows of V but refuses, helped by finding a battered memoir written on toilet paper of a pervious occupant of her cell, a lesbian actress who was imprisoned for her sexuality and anti-authoritarian stance. Evey is threatened with execution if she does not reveal what she knows but she still refuses, at which point V appears, showing her that her imprisonment was a hoax, to prove her loyalty to the anti-Sutler rebels. Evey is enraged but realises that V has shown her she can be strong and face even the harshest punishment. Vowing to help him in bringing down Sutler, he reveals his next plan, the one that will recreate the Fawkes plot of November 5th...
Review:
After seeing The League Of Extraordinary Gentlemen, artist and writer Alan Moore made a move almost unique in the film world and said that in future no films based on his work would carry his credit and - staggeringly - any money made under the contracts and rights deals would go only to his collaborators, he not making a red cent out of the deals. He also vowed never to watch another movie based on any of his graphic novels, which is unfortunate in the case of V For Vendetta since where LXG and the excellent From Hell deviated quite a bit from Moore’s work, V For Vendetta sticks remarkably closely to the 1981 piece, which originally appeared in a UK comic, Warrior, before being combined as a graphic novel for publication in the US. The first screenplay written by the Wachowski brothers, even before their debut feature Bound, V For Vendetta is a bleak piece of work, enivened by imaginative photography and well choreographed set-pieces to punctuate the dense and intelligent plotting. Certain elements, such as the memoir found in the cell, were stand-alone episodes of the original work, here integrated into the main script to detail Sutler’s rise and the breath of his control. Commercials director James McTeigue shows visual flair in his first feature, and the art direction is extremely convincing, bringing to mind the streets of wartime London, with propaganda slogans in the evocative Gill typeface adding to the atmosphere. Moore’s work also blends a number of unsettling wartime elements, such as the sinister Larkhill camp, where V is essentially created and where his revenge is concentrated. Featuring a wealth of British character actors, from Roger Allam (A Cock And Bull Story) as the evil Prothero and Tim Piggot-Smith (TV’s The Jewel In The Crown) as the sinister Creedy, a lot of praise has to go to Hugo Weaving as V, a role the actor, who was in the Wachowski’s Matrix trilogy, took after James Purefoy, who was first cast, walked out as filming began. Wearing the immobile and unsettling Guy Fawkes mask, which is never removed, Weaving has to put over his performance through voice and gestures alone, and manages to make the blade-wielding V both sympathetic and truly dangerous. The adaptation of the story manages to balance the very serious political themes and the action and explosive set-pieces, and McTeigue pulls the strands together for an impressive and occasionally harrowing piece of speculative sci-fi.