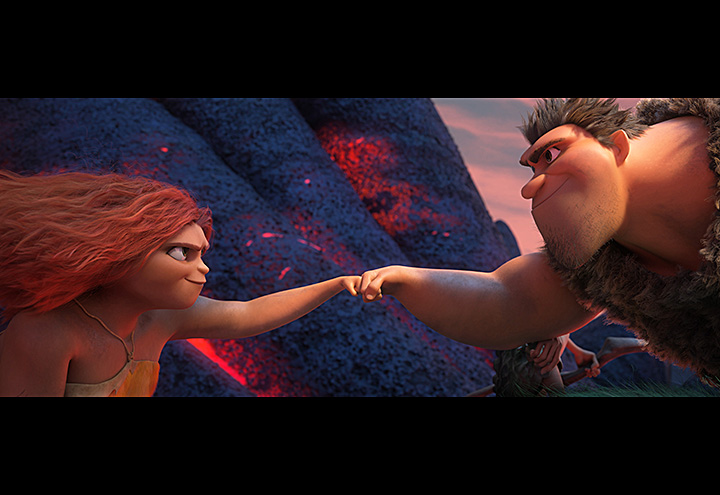 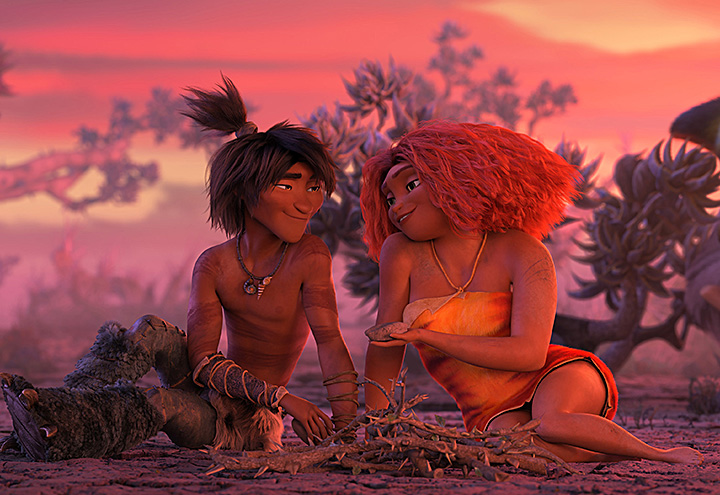 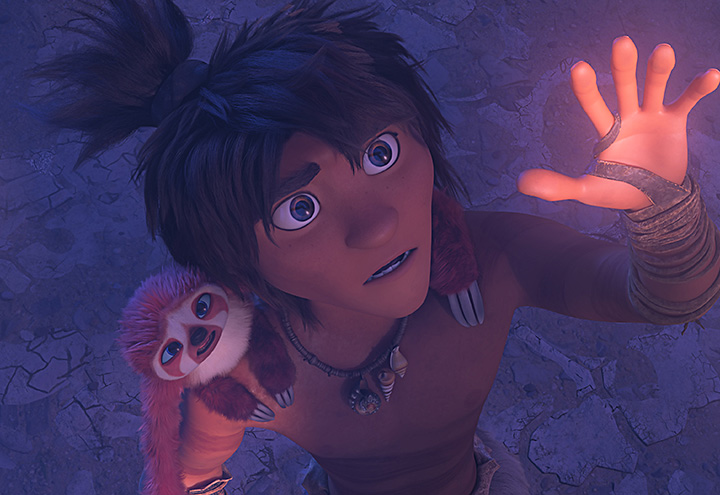 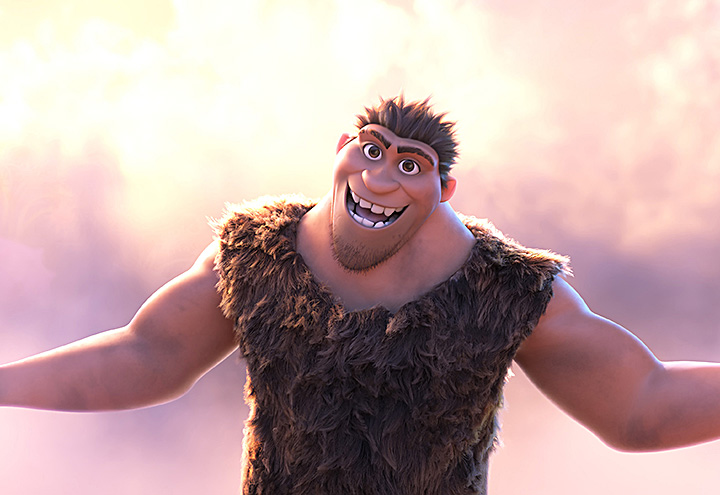 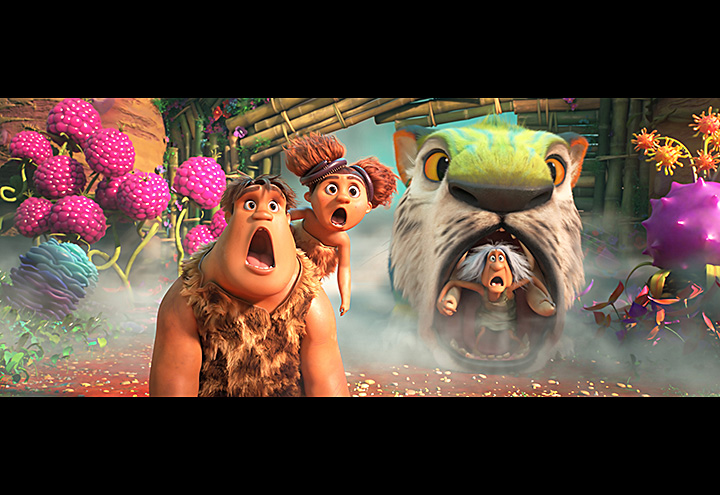 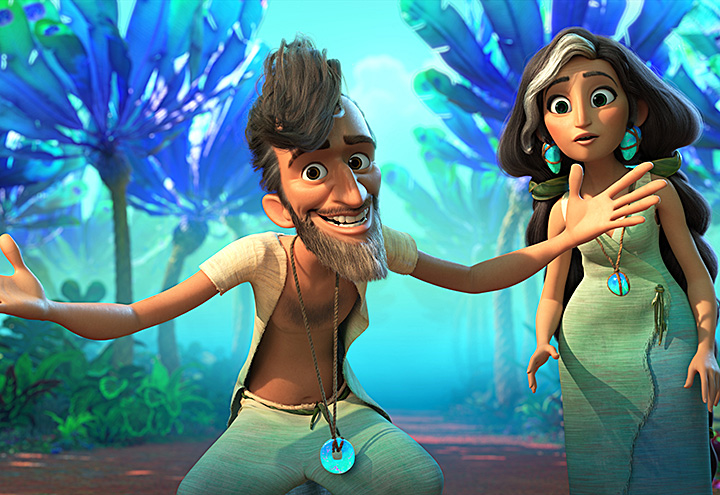 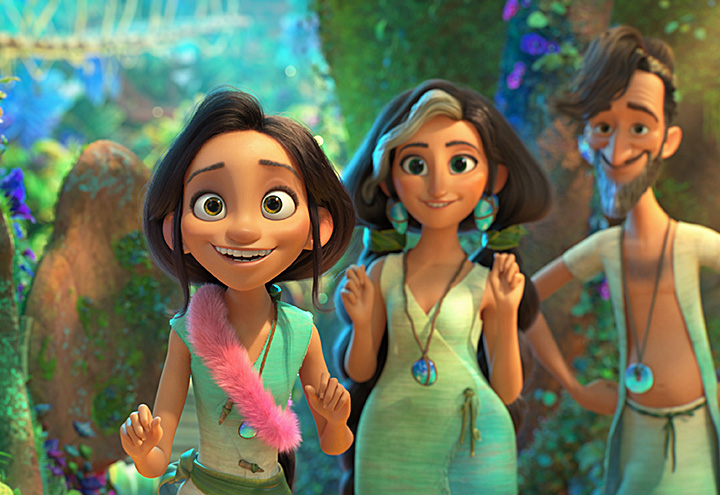 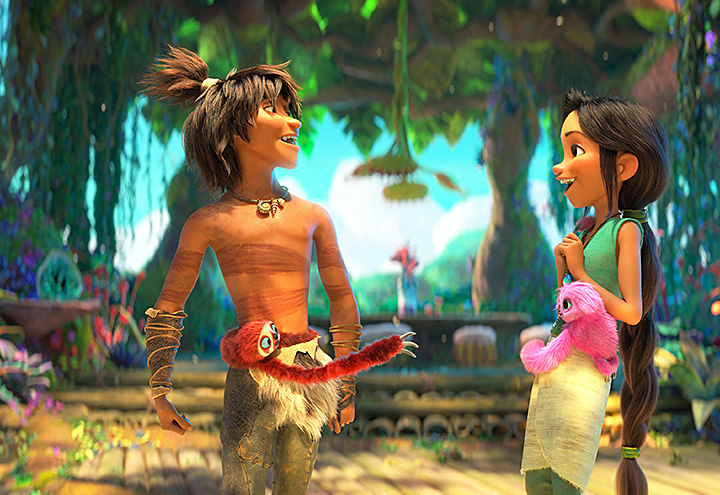 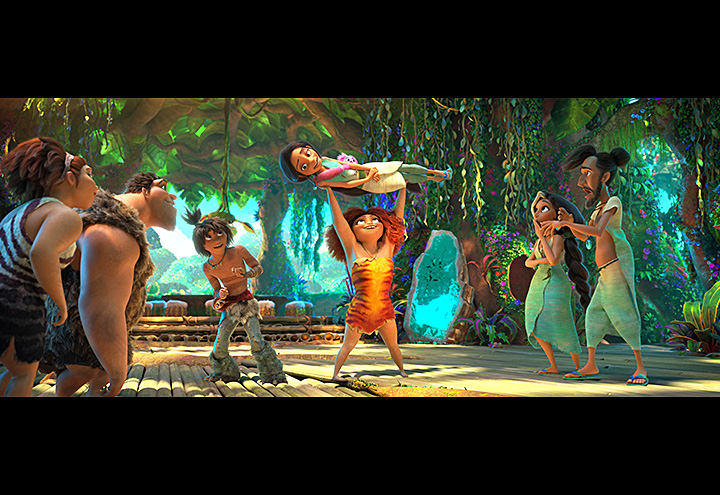 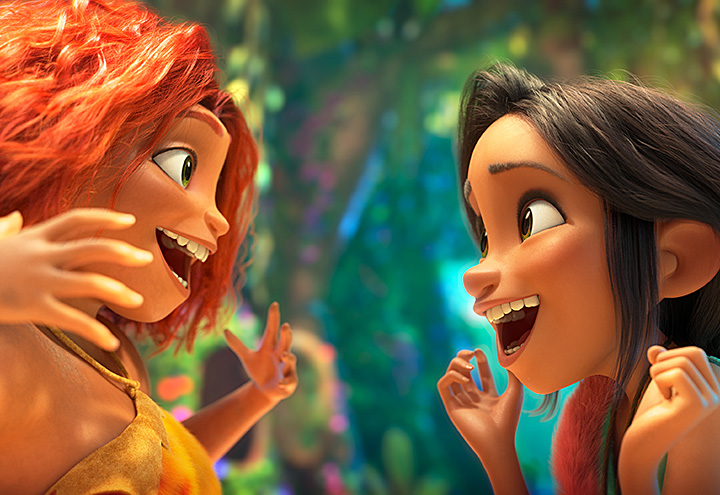 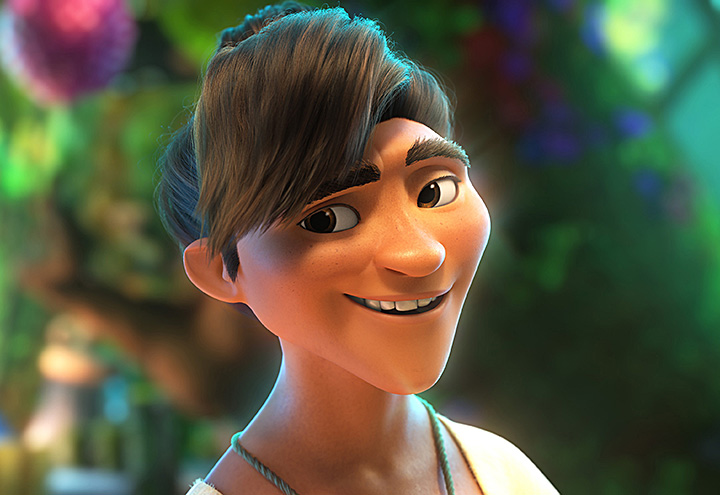 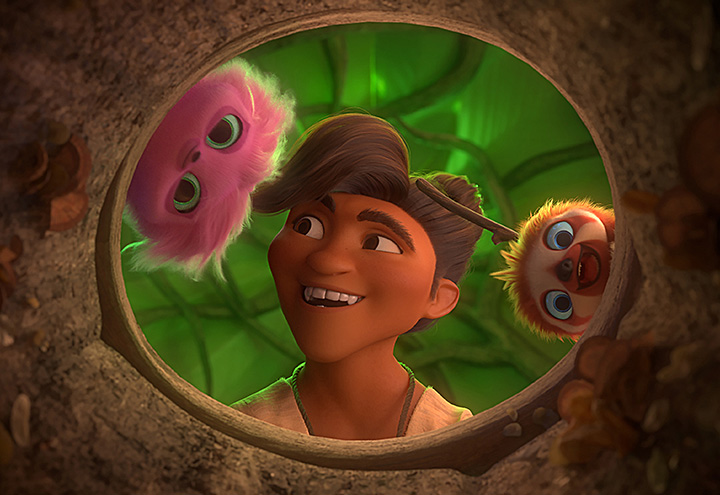 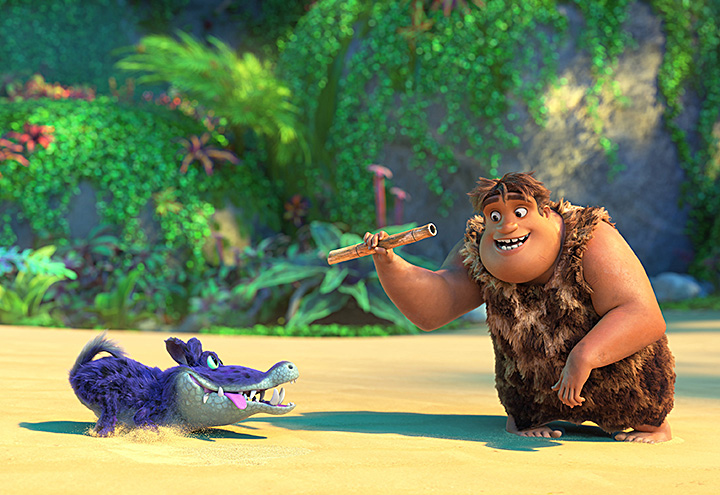 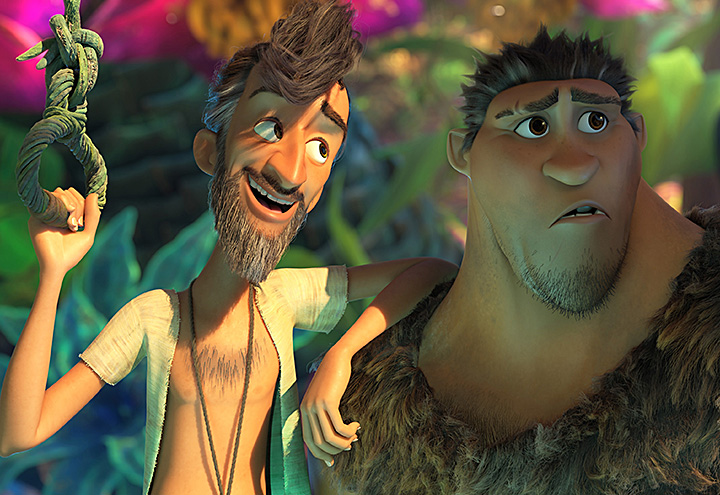 slideshow
Cast:
Synopsis:
A Stone Age family, the Crood clan, face more challenges and dangers as they make their way through the treacherous, ever-changing landscape.

Cavegirl Eep has fallen for the slightly more evolved Guy, who knows the secret of how to create fire, and who is now traveling the land with the entire Crood clan, including father Grug, mother Ugga, lackadaisical son Thunk, young Sandy, who is more than slightly feral, and their ancient Gran. Eep and Guy’s young love, from holding hands to coming out with tooth-rottingly sweet lovey-talk, annoys the rest of the family, some more than others, but when Eep and Guy raise the subject of finding a place for themselves to settle, Grug, not wanting them to leave, panics and becomes determined to find a finding a safe and pleasant home for all of them, the family on their travels having to avoid such accidents of evolution as land sharks, wolf-spiders and monkeys whose repeated slaps and punches are their painful attempts at communication.

Grug is surprised when on one of his scouting trips, he finds himself coming up against a wall, and climbing over it finds a paradise, where the food is plentiful, everything is tranquil and the landscape beautiful, finding it is the home of the Bettermans, Phil and Hope and their daughter Dawn, who Grug finds are friends of Guy’s parents from long ago. marvelling at their home, Phil explains how he has created most of it himself, diverting a waterfall at the top of the mountain down into this enclave, creating a beautiful oasis. Grug falls under Phil’s spell, becoming friends with the Bettermans, hoping knowing them will improve his own family’s prospects, while the other Croods find their new acquaintances condescending and patronising, but he doesn’t realise that the Bettermans have their own agenda, trying to lure Guy away from Eep in order to set him up with Dawn...

Review:
When DreamWorks’ The Croods opened in 2013 (seems so, so long ago), to reasonable reviews and good box-office, $587.2m ($436.44m) worldwide, one would never imagine there would be a sequel, albeit seven years down the line, and even less that The Croods: A New Age would be a small footnote in the history of the US cinema business, being the first ‘major’ title to be released ‘wide’ in cinemas after various regional lockdowns, opening on November 25th 2020 in 2211 cinemas for the US Thanksgiving holidays, and going to premium POV after three weeks, a business model that Universal Pictures chose to experiment with for their ‘A’ titles, at least for the period of the coronavirus crisis, although like a lot of other big Hollywood titles the plans are for it to be released theatrically in Europe and the rest of the world in early 2021.

The result of the first weekend in the US was an above-expectation $14.3m ($10.63m), regarded as very strong considering the limitation of cinema capacity levels and a definite sign that people want to get back to the cinema. What may be even more amazing is that this seven-years-later sequel, reuniting the original cast and having them joined by Leslie Mann (The Other Woman / Blockers), Peter Dinklage (X-Men: Days Of Future Past / TV’s Game Of Thrones) and Kelly Marie Tran (Star Wars: The Last Jedi / TV’s Sorry For Your Loss), another family but an indication of how certain elements of homo erectus are going, as evidenced in their rather on-the-nose name, the Bettermans, earned some surprisingly good reviews, the critics noting that while it’s not up to the heights of DreamWorks’ franchise tentpoles, Kung Fu Panda and How To Train Your Dragon, but is certainly funny, lively and engaging enough to keep big screen-starved family outings entertained.

Ignoring the TV series Dawn Of The Croods, which ran for four series between 2015 and ’17, with a different voice cast and far cheaper production values and animation, a brief prologue recaps the plot for those who may have forgotten or, given the gap between films, may not have been born. Joel Crawford, making his feature directorial debut having worked as a story artist on a range of DreamWorks titles including Bee Movie (’07), the Kung Fu Panda trilogy (’08-’16) and the original Trolls (’16), takes a very different visual approach for this sequel, shifting the realistic and relative accurate backgrounds and vistas into a more colourful landscape of brighter colours, vivid flowers and fauna, and mutant hybrids. suggesting a constantly changing planet and one which would eventually be a safer, less treacherous home for the dominant human species.

The Bettermans obviously are the villains of the piece, with Dinklage and Mann being good voice casting, not only trying to split up Guy and Eep for their own ends, seeing him as a suitably evolved partner for their own daughter, and of course Phil Betterman’s interfering with nature, diverting waterfalls and setting up his own compound, will turn round and bite him in the end, as indeed will most of the hybrid and mutant creatures designed by the art department, and the slap-happy monkeys are a delight.

And one has to mention that veteran Cloris Leachman returns as Gran, another role for the constantly busy actress, now aged 94, and whose career began back in 1947 in an uncredited bit part in the musical drama Carnegie Hall, and has since encompassed nearly 290 roles, ranging from film noirs such as Kiss Me Deadly (’55), Oscar-winners Butch Cassidy And The Sundance Kid (’69) and The Last Picture Show (’71), a bunch of Mel Brooks’ including Young Frankenstein (’74) and High Anxiety (’77), and a huge number of TV shows and series, meaning her career has spanned an incredible eight decades.

Reviews were largely kind, with most critics being generous, The Wrap saying ‘You may never have thought you needed or even wanted a sequel to The Croods, but you may find it a pleasant surprise in a year where most of the surprises have been anything but’, and Movie Nation believing the pic has ‘ …some of the derivative limitations of the first film – the faint whiff of riding Ice Age’s coat-tails. But the players make their slapsticking, pratfalling, punking and pranking characters breathe, live, love and care’. IndieWire thought it ‘ …ultimately spins that off into a wacky adventure that somehow involves aforementioned punch monkeys (cute, but very punchy indeed), a revelation that the Croods franchise might intersect with the world of Mad Max, and a generous dash of female empowerment (plus awesome fake heavy-metal music to go with it). It’s a little silly, very colorful, and entertaining enough to deliver some good-hearted ideas that aren’t beholden to any period in time’. Less taken were Screen Daily, finding ‘The comedic sparks and emotional stirrings simply aren’t as potent this time around, despite some colourful animation and an occasionally inspired silly streak’.