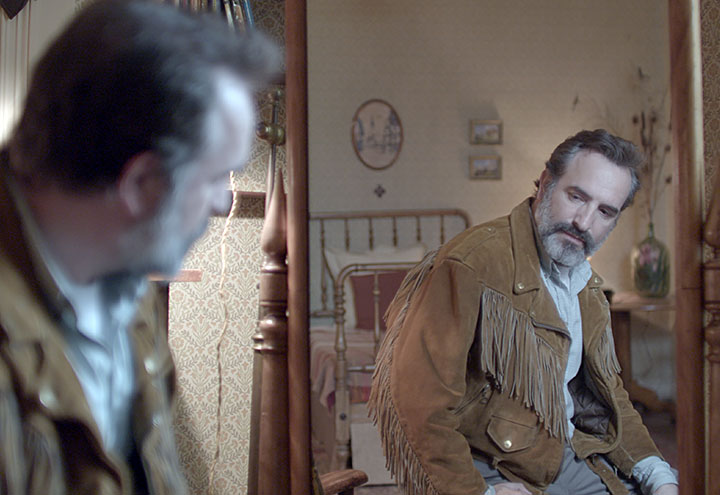 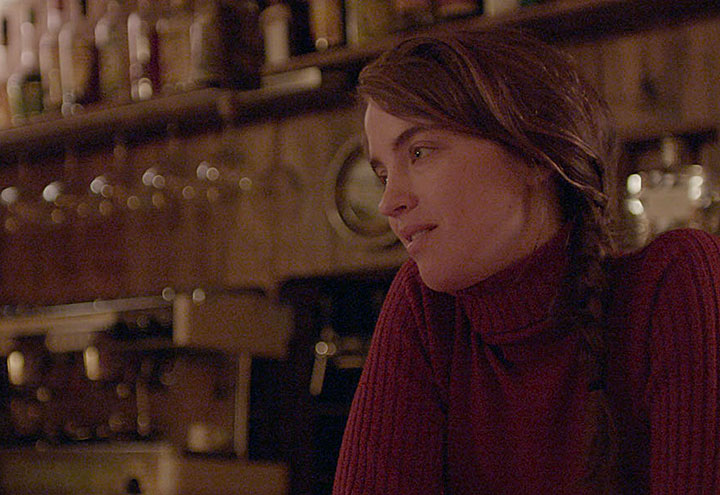 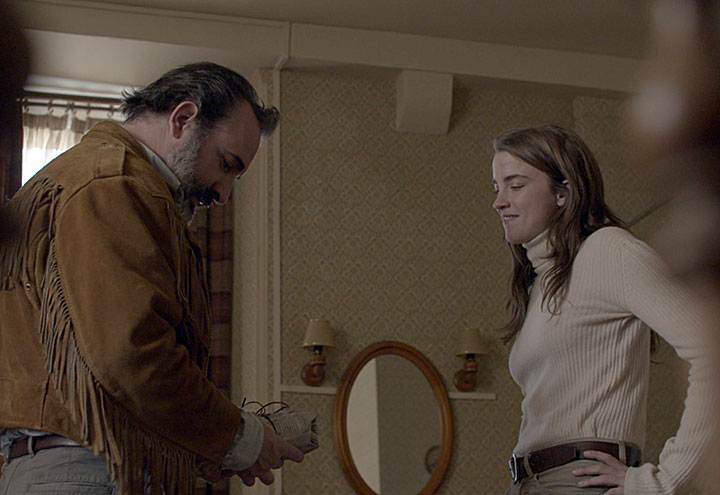 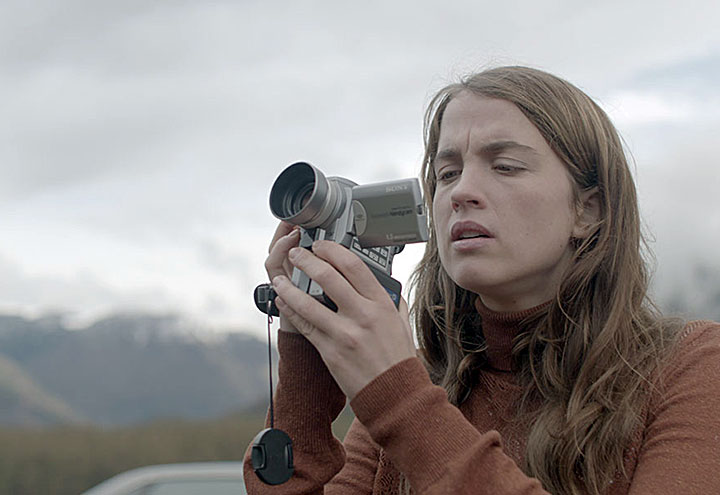 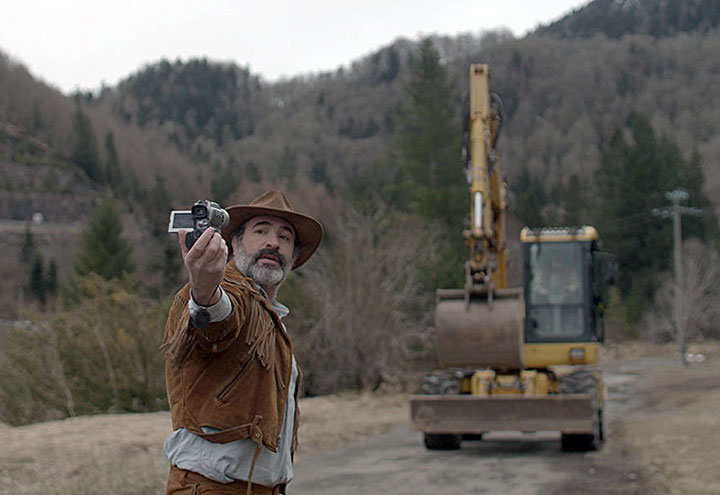 slideshow
Cast:
Synopsis:
Georges, forty-four years old, drives down a French autoroute. Stopping at a gas station, he goes into the restroom, takes off his old corduroy jacket, and tries to flush it down the toilet. He arrives at the home of an elderly man, Monsieur B, from whom he has arranged to buy a vintage, Italian-made, fringed deerskin jacket, for €8000, Georges having drawn the cash out of the bank. In thanks Monsieur B also gives him a handheld digital video camera.

Georges receives a phone call from his wife, who has discovered what he has done to their savings, and realises there is no going back.

He drives to a small Alpine town, booking into the only hotel, and persuading the clerk to take his gold wedding ring as security until he can sort out a problem with his credit card. Having shoplifted a book on filmmaking, that night he goes to a bar, where is only one other customer, a middle aged woman, and the barmaid, Denise, and believes they are talking about his jacket, and his ‘killer style’. He passes himself off as a filmmaker, who’s producers on his next film project are in Siberia, filming a major fight scene on a glacier as he takes footage of the Alpine mountains. Going back to the hotel, and finding the other customer was a hooker, he admires himself in his jacket, starting to film himself wearing it.

Going to the bank, he finds that his wife has blocked his access to the account. Regardless he begins a bizarre film project, going up to youngsters and filming them saying the prepared line ‘I swear to never wear a jacket again for as long as I live’ as they place their jackets in the boot of his ageing Audi, paying them then driving off with their garments still in the car, Georges having a delusional passion to be the only person in the world wearing a jacket. He goes to Denise, spinning more yarns about the film and his producers in Siberia, and managing to borrow money from her, supposedly for more digital cassettes for his camera, but finds himself offering her the job of editor on the project, and giving her the already shot footage. She turns out to be hugely enthusiastic, believing it to be some sort of mockumentary about a man and his obsession, Georges stringing her along, hoping to get more money out of her, and finding that the hotel receptionist has committed suicide, causing him to have to get to see the corpse to get his wedding ring back, which is on the corpse’s finger.

Georges fills with confidence, believing his ‘killer style’ is going to get him through this, getting a deerskin hat, and later deerskin trousers, to match the magnificent jacket, but Denise’s enthusiasm only fuels his delusions, which start to take a very macabre turn…

Review:
As well as being a film director, French helmer Quentin Dupieux is also a music video maker and electronic DJ, and it has to be said that his previous films are certainly an acquired taste. His horror comedy Rubber, his third feature, premiered in the Cannes Festival’s Critics' Week in 2010, the story of a sentient murderous car tyre bouncing its way across the backroads of the US being generally well received, although his subsequent pics have received rather varying responses, Wrong (’12) and Reality (’14) getting pass marks while Au Poste! (’18) gave him some of the best reviews of his career, although Wrong Cops (’13) got some of the worst reviews on record for any comedy pic in recent memory.

Le Daim, his eighth feature, and which opened the Director’s Fortnight at the 2019 Cannes Festival, translates strictly as The Deer, but given the central character of Georges and his overwhelming obsession, the English title Deerskin is actually more accurate. Despite all the offbeat elements, and one has to understand that all the characters in Dupieux’s film are at least slightly potty, this is probably his most accessible yet, anchored by perfectly judged performances from Oscar-winner Jean Dujardin (The Artist / Le Retour Du Héros) and the excellent young French actress Adéle Haenel (La Fille Inconnue / BPM (Beats Per Minute)). Dujardin’s character is obviously on a dangerous path from the off, having drained his joint bank account and having a rather fatalistic phone conversation with who one presumes is his wife. Obviously that relationship is over, but Georges is already deeply in love, with the rather dated, fringed country & western style deerskin jacket he has bought for several thousand Euro from the elderly Monsieur B (a cameo from Albert Delpy, Julie’s pére), and getting a digital video camera thrown in. The clearly captivated Georges is obsessed with the garment, mentioning, to almost anyone in earshot, his ‘Style de tueur’ or ‘killer style’ several times, so much so that one suspects that was the pic’s original title. In the small Alpine village to which he makes a retreat, his self-regard and a escalation of his lies in what appears to be the only bar brings him into contact with Denise (Haenel), a bored student whose sideline is re-editing films on her computer, and to keep up his deception Georges poses as a filmmaker, employing her as his editor. Here the film, having already verged on the dark, takes a leap into the macabre, Georges effectively becoming a serial killer, urged on by the energised Denise, although his killing spree, with an inventive choice of weapon, is handled quite lightly by Dupieux, with only one victim, an unfortunate woman who stops her car to ask for directions, being seen dispatched in detail, but even then the scene is played for dark humour, and despite the large number of victims in what seems to be a very small place, the murders are never even mentioned. Indeed the scene which may strike viewers as the closest to all-out bad taste is when Georges has to retrieve his wedding ring which is now on the hand of a hotel clerk who has committed suicide. Essentially the story of a disturbed man undergoing a complete nervous breakdown, and the young woman who enables him in ever more destructive and nihilistic ways, knowing that what he says are usually lies, Deerskin is nevertheless the director’s most disciplined film, obviously made on a tight budget and limited locations, filmed in and around the Pyrénées-Atlantique region in the southwest of France, but would be a good introduction to the man’s work, and while some of his work has been called ‘Pythonesque’, the sudden, unexpected ending here fits that term perfectly.

Strangely for a filmmaker who is also a musician, the soundtrack comprises existing music, an opening French chanson, and snatches of what sounds like the theme from a vintage film noir.

Dupieux also knows that this sort of thing can become wearing, and generally brings his films in at around eighty minutes, Le Diam running a sprightly seventy-seven, not outlasting its welcome. It also means that when Dupieux’s pic played the London Film Festival, it was roughly a third of the length of the closing film, Martin Scorsese’s sprawling The Irishman.