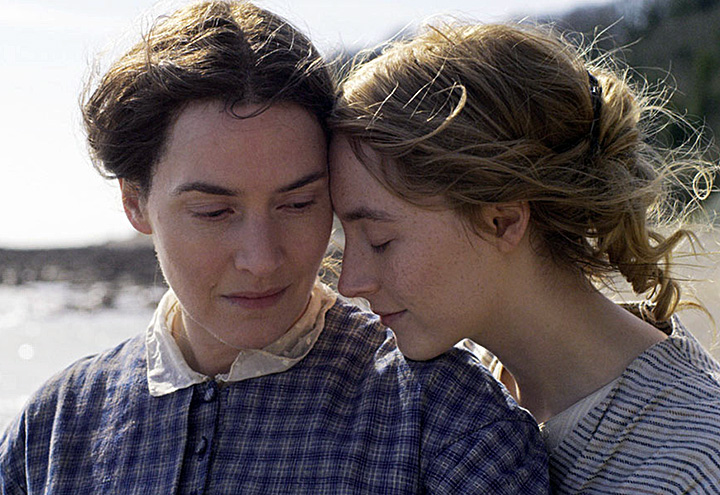 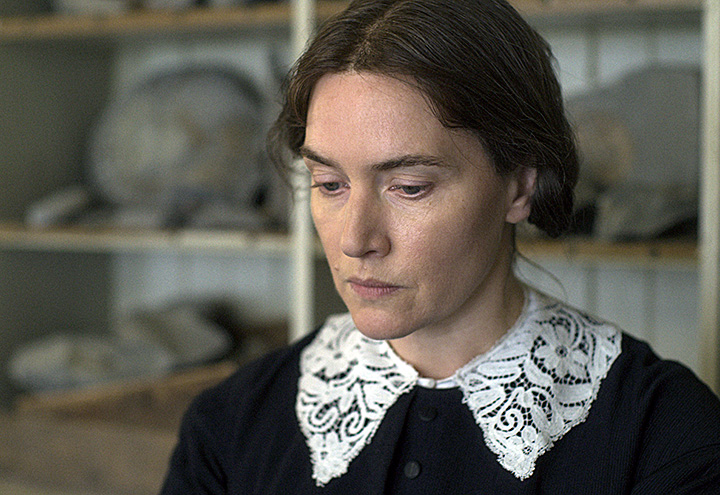 The closing film of the 2020 (virtual) London Film Festival, writer / director Francis Lee’s second feature Ammonite, starring Kate Winslet (Titanic / The Reader) and Saoirse Ronan (Brooklyn / Lady Bird), initially comes across as a gender-swapped version of his debut, 2017’s God’s Own Country, set 170 years earlier and moving the location to the coast of Southern England. Based, according to some very loosely, on the life of Mary Anning, a self-taught palaeontologist whose feats in the archeological field were regularly credited to other, male, researchers and explorers, Lee here makes her one half of a lesbian romance, conducted with all the discretion and secrecy that the period demanded, and in fact so discrete here one wonders when if it will actually occur.

Although Winslet’s character, Mary Anning, was a genuine historical character and palaeontologist, largely self-taught and excluded from the male-dominated scientific community of the time, who largely turned her work and research into becoming a dealer in fossilised remains from the Blue Lias and Charmouth Mudstone cliffs near Lyme Regis, and the only time her writings appeared in print was in an extract to a letter to the scientific journal The Magazine Of Natural History, correcting an error in another writer’s published article. Her work and legacy is now finally recognised by the scientific community, the only other close relative being her older brother, one of her still surviving relatives complaining that the characterisation of her as a lesbian is a complete invention purely created for the script, the reason why she never married, dying of cancer at the age of only 47 was that she had to look after her ailing mother for most of her life, which at the time was expected of one of the daughters of any family.

Lee uses the same template of his previous, award-winning film, a gay love story carried out against a barren, harsh location, between two people from different social background, Anning struggling to make a living while Ronan’s Charlotte comes from a comfortable, wealthy marriage, and each are isolated in their own way, Anne through her duty in looking after her elder mother (Gemma Jones - the Bridget Jones and Harry Potter series), and Charlotte through the trauma of losing a child, in circumstances which are never fully explained, and there seems to be little to bring the women together, apart from their respective loneliness. The actual relationship between them doesn’t develop until over an hour into the film, and even then is largely kept off-screen, post-coital scenes seeming to have the pair of characters seemingly somewhat surprised at what has transpired.

The film benefits from the remarkable locations, the pic being shot in Lyme Regis and on the Dorset coast by French DoP Stephane Fontaine (A Prophet / Elle), and the attention to detail is admirable on behalf of art director Richard Field (TV’s Midsomer Murders / Britannia) and set decorator Sophie Hervieu (Child 44 / The Aeronauts), and while completely centred on the female leads, also features good contributions from Claire Rushbrook (Close Your Eyes / Spider-Man: Far From Home) and James McArdle (’71 / Mary Queen Of Scots), as the benevolent but neglectful Murchison, with Alex Secarneaum returning from God’s Own Country for a small role as a local doctor.

Lee’s film was due for a high-profile launch before the coronavirus broke, set to premiere at the 2020 Cannes Film Festival, and was then put back to the Telluride Film Festival in Colorado in September, which was also cancelled due to the pandemic, eventually showing at a number of largely virtual world fests, including Deauville, The Hamptons, Mill Valley in California, New York’s Newfest, Ghent, Chicago and Montclair, and one element in the reviews which were positive were all about the performances rather than the film itself, Entertainment Weekly saying ‘There's an austerity to the film - long shots of stone and candlelight, clipped dialogue - that can feel rigorous, almost grim. But Lee is only building a richer kind of mood, and priming the canvas for his actresses, who reward that faith with remarkable performances’, with RogerEbert.com finding ’From the beginning of [film], writer/director Francis Lee trusts his lead performer to convey an incredible amount without dialogue. And that trust pays off in one of the best performances of Kate Winslet’s career’. Ion Cinema couldn’t resist saying ‘Assisting in this painting of a 19th century lesbian romance are authentically austere performances from Kate Winslet and Saoirse Ronan, whose requited desire brings them both out of their shells’.

Several noted the obvious similarities to Corrine Sciamma’s Portrait of a Lady on Fire, The Chicago Tribune noting ‘What’s missing is the vital emotional turbulence of Sciamma’s modern classic, or of any three-dimensional story of passion and feeling. The compensations here are smaller, but they’re welcome, too; they’re more about two fine actresses digging for what’s underneath the obvious contours’, as The New York Post believed ‘Being a lesbian period piece, the film’s earned inevitable comparisons to last year’s ‘Portrait of a Lady on Fire.’ Sure, it’s similar, minus the chemistry, humor and joy’. Variety Fair bemoaned ‘Whatever the truth of Anning and Murchison’s time in Dorset together was, Ammonite could have done whatever it wanted. It chooses instead to do close to nothing, and leaves us, quite like its central pair, helplessly grasping for more’, as The Playlist found it ‘ …too distant, underpowered and colorless for its own good, as if somewhere down the line, its heart had died and hardened like a fossil waiting to be discovered’.

Ammonite is the story of the remarkable Mary Anning told through Francis Lee’s prism, and she deserves a biopic with a less obvious added agenda.