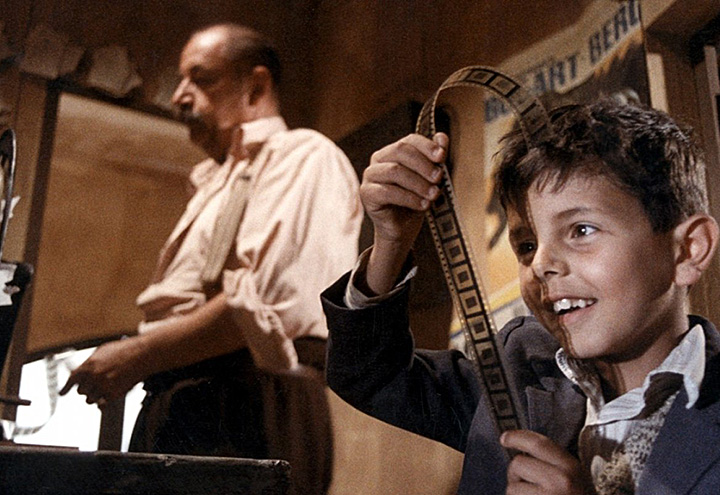 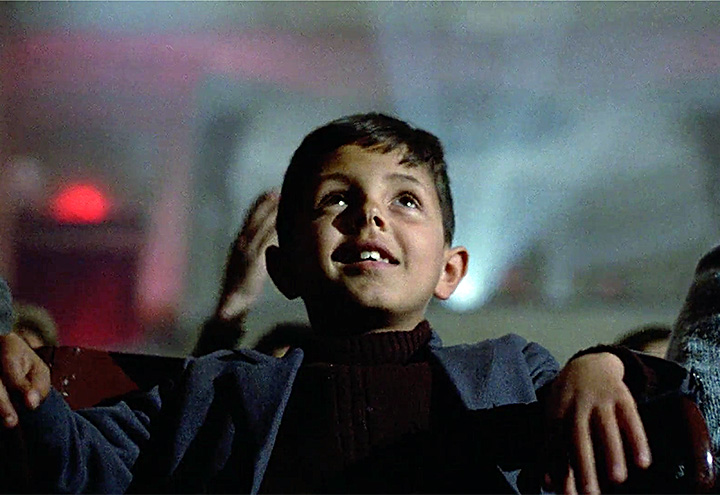 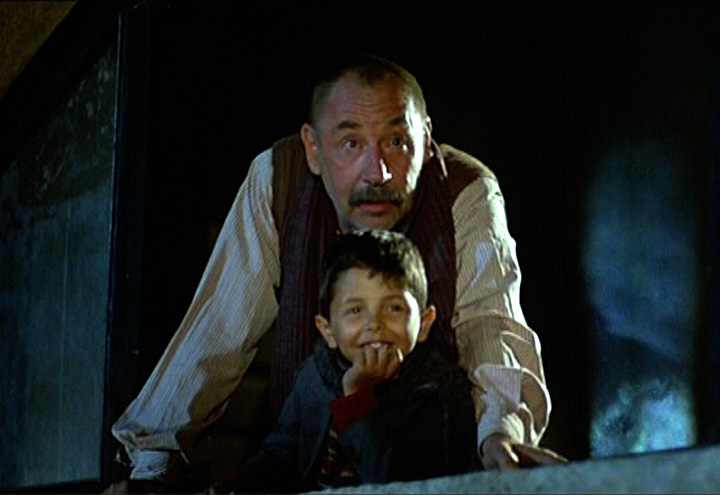 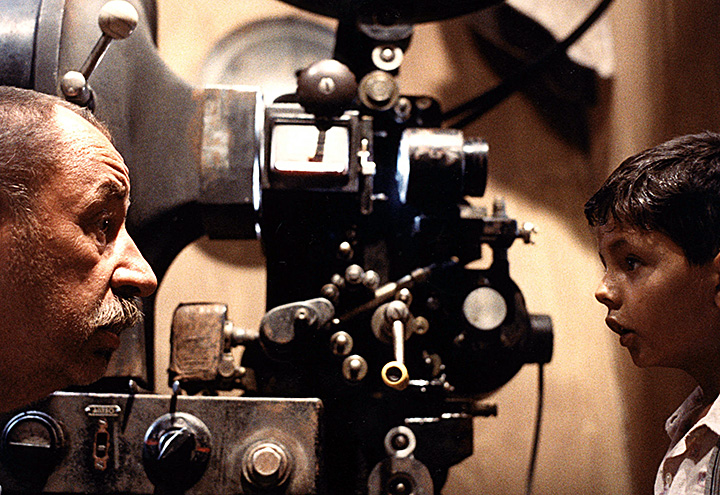 slideshow
Cast:
Synopsis:
After receiving a message from his mother that ‘Alfredo is dead’ successful film-maker Salvatore Di Vita returns home, recalling growing up in the small Sicilian village of Giancaldo, where the weekly visit to the beautiful Cinema Paradiso was as important, if not more so, as going to Mass. Salvatore thinks back to how as a young boy, then known to all as Toto, he regularly played absent from his duties as altar boy to visit his friend Alfredo, the projectionist, persuading him to let him keep the clips of film censored by the local priest, Father Adelfio, mostly of kisses, in return for letting Alfredo peek at his answers in a school exam he is taking as an adult. When a fire breaks out amid the volatile and dangerous nitrate stock film, Toto rescues Alfredo from the projection box, and when it becomes clear the old man is blinded, Toto becomes his eyes, eventually taking over as projectionist when Alfredo retires. He begins making his own short films and falls in love with the aloof, wealthy new girl in town, Elena Mendola, but their affair fizzles out while he is doing his military service and she is away at university. Two decades later, having become a successful film director, having had his love of cinema nurtured by his time at the Cinema Paradiso, he attends Alfredo’s funeral and later, spots a girl who is the spitting image of Elena. Fascinated and intrigued, he follows her home, to make a tender and poignant discovery.
Review:
Now rightly hailed as a beautiful and evocative piece of occasionally unashamedly sentimental filmmaking, one should remember that Cinema Paradiso was actually responsible for instigating a change in the rules of eligibility for Oscar nominations for foreign productions, as well as being a strange adjunct to the story of the film itself. Directed by Guiseppe Tornatore (Stanno Tutto Bene / Malena), making only his second feature and being openly largely autobiographical, the film opened in Italy under the title Nuovo Cinema Paradiso, running 155 minutes, and was a surprising flop, causing Tornatore to return to the editing bench and produce a new international version, running 123 minutes, primarily meant for the export market. When this cut of the pic, minus the Nuovo as well as the excised footage, largely from the last third of the film, became a hit in the UK and Europe before becoming an arthouse hit in the US, it was nominated for a Best Foreign Language Film Oscar, which it eventually won, but also caused protest from other producers, who insisted that the film which was nominated was not the same as was released in its’ home territory, and more commercially aimed at the international market, precipitating a rule change that the version of the film under consideration had to be the same as released in the home territory. Certainly less overtly mawkish in its’ international version, the film still pulls very effectively at the heartstrings, this obviously being a very genuine labour of love for Tornatore, clearly the Toto character, his fascination with the world of film is nurtured by the wonderfully crusty projectionist Alfredo (the superb French veteran Philippe Noiret - La Grande Bouffe / Il Postino), who speaks in reams of film dialogue, and the senses between the two manage to be warm and emotional without ever quite tipping into the twee or outright creepy, and the cinema itself is a beautiful piece of design by Andrea Crisanti, and certain scenes are beautifully touching, such as the night when many patrons cannot get into the cinema for the screening of a comedy by the film comedian Toto, largely forgotten now but an immense star in post-war Italy, and Alfredo instead projects it to the huge crowd on the wall of a piazza linger long in the memory. Although essentially conceived as a three-act story, it is the third which has been the most heavily cut, involving the return of the now adult Salvatore (Jacques Perrin - Z / Section Speciale) to his home village, and a reunion with his former love, Elena (Brigitte Fossey - La Boum / Enigma), which focuses the film more on the memories Salvatore has of his childhood rather then his present, and which in retrospect seems like a very wise decision to make most of the significant cuts in this section. Whimsical and often charmingly funny, some may not be able to tolerate the levels of sentimentality, but the technical aspects of the film are superb, from the cinematography by Tornatore’s regular DoP Blasco Giurato and a very fine score by Ennio Morricone, and while some may quibble with the execution of the story, no one can deny that the film is a genuine love song penned to the cinema and the joy and happiness it brings. For those who truly cannot get enough of Tornatore’s nostalgia, an extended cut, The Special Edition, clocking in at the helmer’s original intended length of 167 minutes was released in 1993.